by Illumini
Det har kommet et nytt regelsett som heter "This is not a test" http://worldsendpublishing.com/this-is-not-a-test/

Got to play a couple games of TNT recently. My friend chose to take control of an Enclave patrol ready to bring back order and bring the wastelanders back under control of the government. I went with raiders.


Rumours of a city buried under the sands of the wastelands have circulated in the wastelands for years. The wealth of relics from an entire unlooted pre-war city could make new kings and warlords in the wastes. Many loners and stalker groups have ventured out in search of this mythical city, few have returned, and over the years, more and more people thought it was merely a myth.

It was only very recently, after a duststorm raging for weeks that the myth was proven to be true. The immense winds moved the desert and uncovered large parts of the buried city. The jagged skyscrapers could be seen miles away. The jagged buildings worked as beacons on the factions of the wastes. Raiders, stalkers, the brotherhood and more have started the perilous journey into the wastes in search for riches and power. And from the safety of an underground bunker, a new faction decided it was time to rise, the Enclave. The relics of the past could not be trusted to the miscreants above. Heavily armed, a patrol has made their way into the city to find and secure relics.

An army research office in the outskirts of the buried city is their primary target. However, another group has also made it to the city, raiders.

The raiders deployed first and took advantage of their large numbers to threaten all three sides of the field. The enclave deployed together near the red building.

The raiders quickly moved up the field and got in position to take four of the objectives. The enclave moved up more timidly.

Under the influence of psycho, Motorhead, the wrecker with a heavy weapon, went into a rage when he spotted the cowardly enemy. He charged straight at them, revving his chainsaw and screaming obscenities. As he vaulted a trashed car, he stopped and screamed at his enemy. Perturbed, the Enclave soliders hesitated for a few seconds before reverting to their training and gunning the lunatic down.

His sacrifice did slow the Enclave patrol down however, and the raiders grab 4 pieces of pre-war tech while under fire. Fearing that the relics will go into the hands of savages, the Enclave leader sends his Valkyr junkies into the office building to fight bloody hand to hand combat with the raiders. The fighting is brutal, but it gives the Enclave enough breathing room to go for a relic. The Enclave commander also gets in position to defend the eyebot that unfortunately had a malfunction just as it reached the relic.

While the junkies fight for their lives, the seekers fire into the swirling melee, luckily managing to take out a raider and no junkies.

Below the Enclave commander, his Valkyr junkies are outnumbered and outmatched by the raider horde. The warlord himself smashes one of the junkies into a wall and roars a challenge to the power armored man. Two raiders even scale the floor and assault the commander himself. 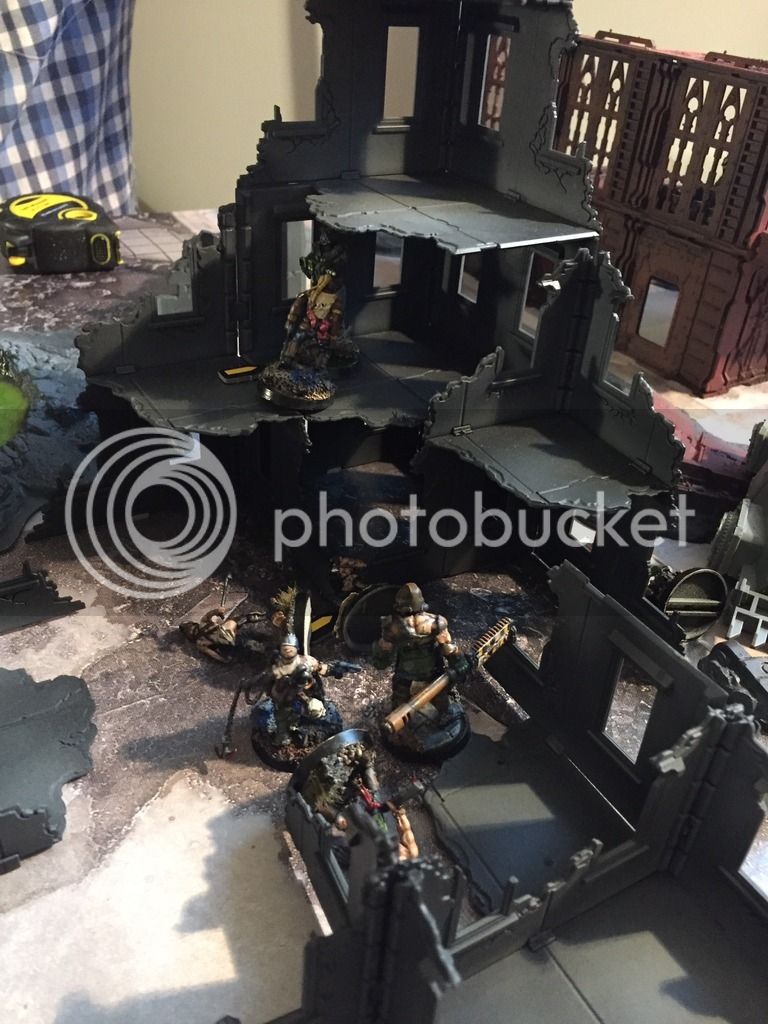 The commander fights the raider savages with his bare knuckles while his seekers move away from the screaming psycho´s coming closer and closer. Jamming weapons at the wrong time allows the raider leader to catch one of them, sawing the man in two.

It looks dark for the Enclave patrol, but their tactical training allows them to fight on, and when the raider warlord goes down under a hail of lead, the tide turns. The commander powers through the two raiders assaulting him, the eyebot comes back online, and from a high vantage point, the seeker sergeant manages to keep the raiders of his buddy at the ground.

Their numbers quickly dwindling and with 5 out of 6 pre-war items in their possession, the raiders go on the defensive, going prone and hiding from the superior firepower of the Enclave patrol. The patrol takes advantage of the pause in the fighting to pull out of the sticky situation with their one pre-war item and their casualties, leaving the field to the raiders.

It ended in a raider win, although the Enclave turned the game around from the very bleak start, the raider´s ability to quickly grab VP locations sealed the deal.

However, when you look at the casualties, it is less clear who really won  :)

The Enclave manages to find a working set of power armor and a lot of cash. One seeker dies, sawed in half by the raider warlord, while both junkies make it. With the money made, the Enclave buy an arbitrator and LMG to step into their new power armor and bring in a new seeker.

Two raiders die from their wounds. With the funds gained from selling off the pre-war items, the raiders also buy a heavy weapons trooper. This guy gets a rocket launcher and combat armor, ready to hunt power armored enemies. They also hire a raider with a rifle and a new wrecker. 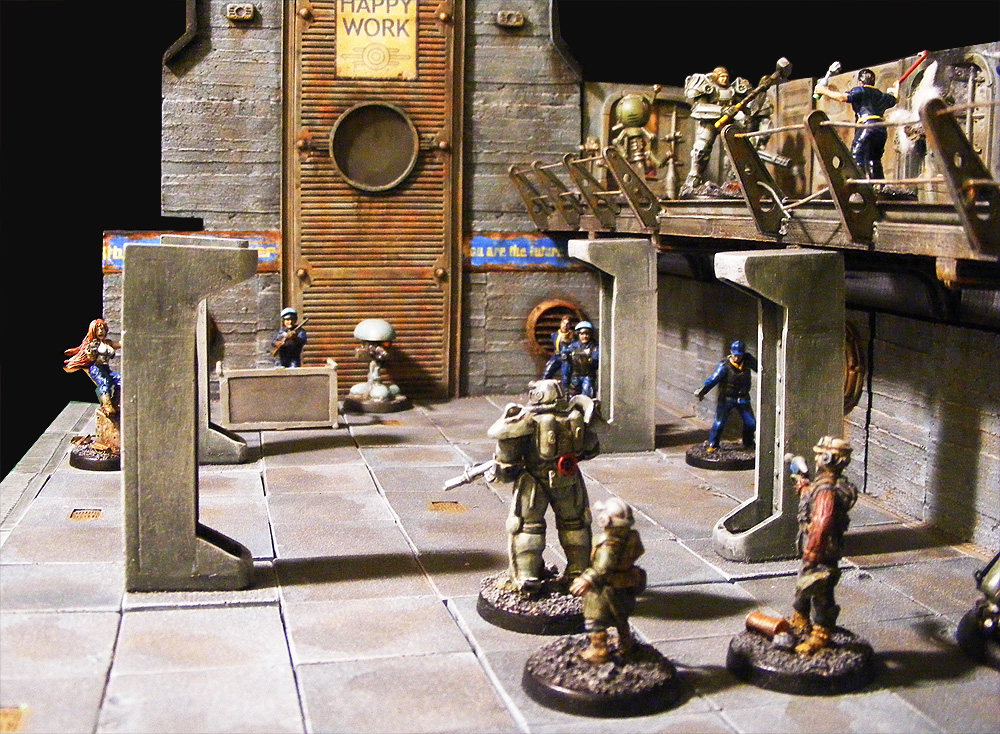 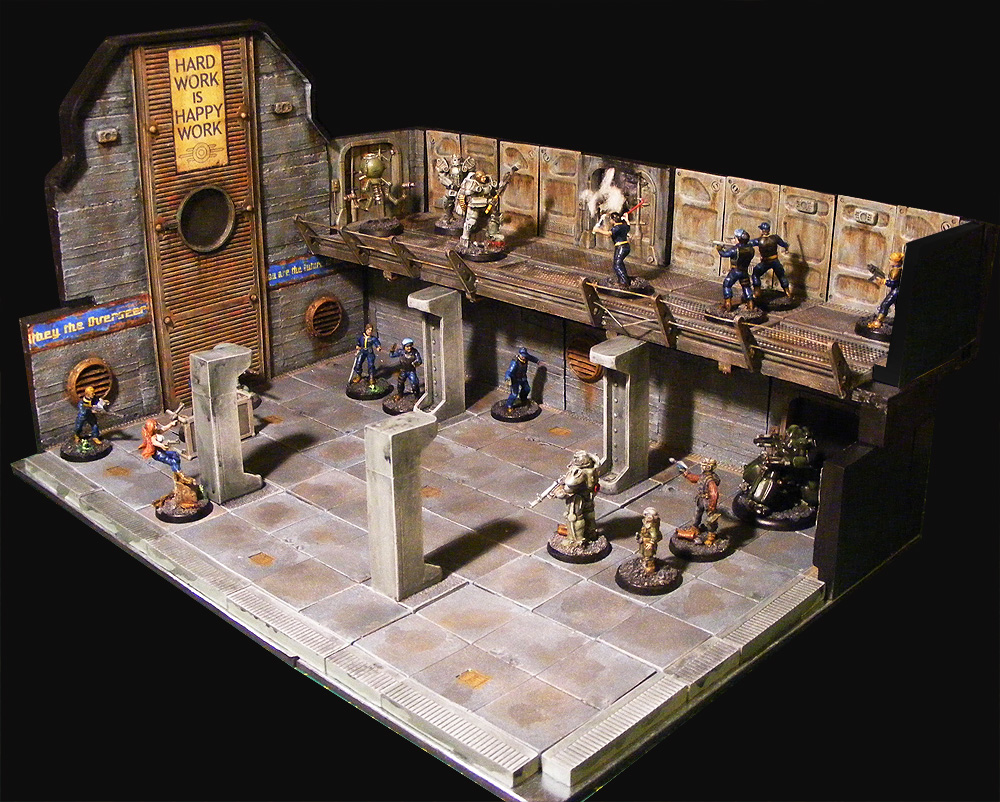